As can be seen in the photo below, the Hangar 9 Sukhoi is a HUGE model in the world of ARF planes! Intended for competition, on an international level, the quality and completeness leaves little to be desired. 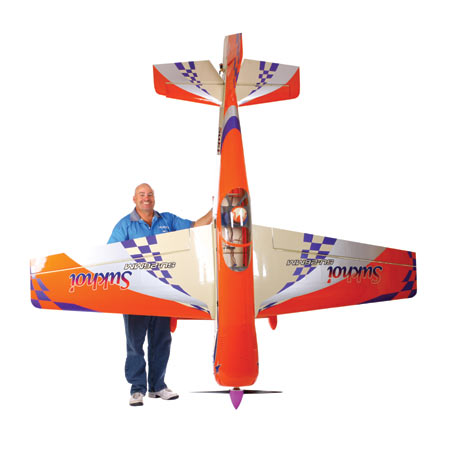 170cc gas engine should be your choice for power, probably with tuned pipe mufflers to maximize performance. This large scale model aircraft is intended for the highest level of IMAC competition. It is fully capable of all the 3D  aerobatics and in the right hands, it will give class leading performance.

Construction is of precision laser-cut balsa and ply and it is expertly covered in UltaCote.

Colors are purple, orange and white and a set of decals are included, for you to apply where you think is appropriate.

The Hangar 9 Sukhoi is shipped in 3- boxes and these are not small boxes either!  The gross weight of the fuselage box is 24,5Kg(53.9lb) and note that the weight of actual parts inside is 4.1Kg (9.02lb)! The packing design is very robust and should guarantee that all parts should arrive with no damage.

You had better make sure that your workshop is big enough to build ARF airplanes of this size and also have a way to get this giant scale model to the field. 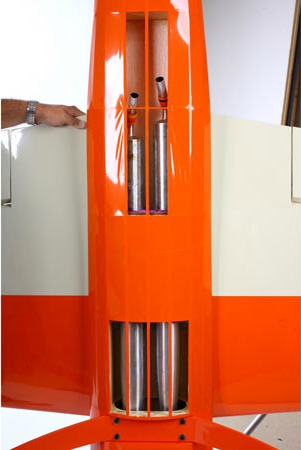 There are no less than 3 different types of muffler that can be accommodated and the Hangar 9 Sukhoi is designed to accept all of them. The photo shows the MTW tuned pipe installation but an MTW canister muffler set-up is also possible and finally a standard in-cowl, twin muffler system can be used. For more details, visit the Desert Aircraft web site. 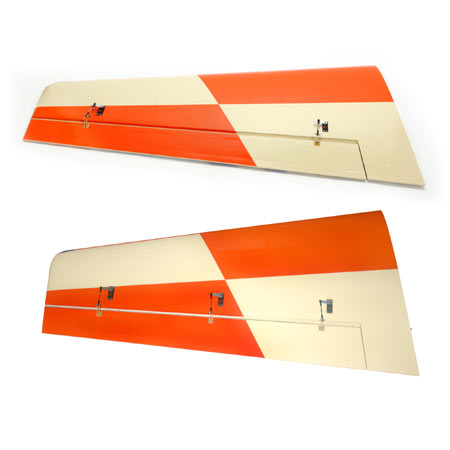 Another choice that needs to be made is regarding the number of servos that will be used for the ailerons. In the manual, Hangar 9 describe the situation by saying use 2-sevos for precision aerobatics but use 3-servos if you are planning on flying 3D airplane aerobatics.

The servo of choice for the Hangar 9 Sukhoi is the JR DS8911HV Ultra Torque Servo. This is a digital, metal geared servo with high torque (470oz/in) and high speed (0.12seca/60 degrees) at a high voltage that can be supplied by a 2S lipo battery but is in a standard size case.

Whether 2 or 3 servos are used, some form of synchronization, between multiple servos on one surface , must be employed. The JR matchbox would be ideal and the manual shows how to hook them up and mounting instructions are also shown. 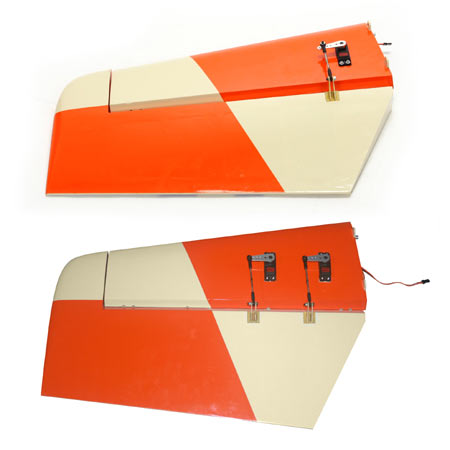 Now we can take a look at the elevator servo hook-up. You can tell this is a large scale model aircraft by the number of servos mounted on the control surfaces!

For the elevator, you can use one or two DS8911HV Ultra Torque Servos, per elevator half. Once again a JR Matchbox or similar device is required. If 3D aerobatics are your aim, then 2 servos are recommended. 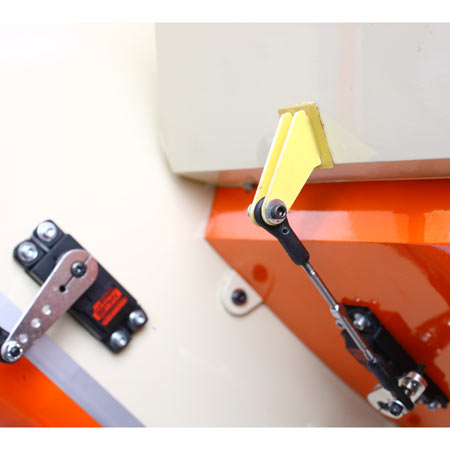 This photo shows the rudder servo hook-up for the Hangar 9 Sukhoi. A minimum of 2-JR DS8911HV Ultra Torque Servos  are needed. (1 per side.) Actually it is possible to mount 4 servos for the rudder!

2 of the JR 8911"s produce more than enough torque, but if less powerful servos are used, then you may very well need 4 for 3D maneuvers!

Note also the use of aluminum servo arms. These are suggested for all control surfaces. 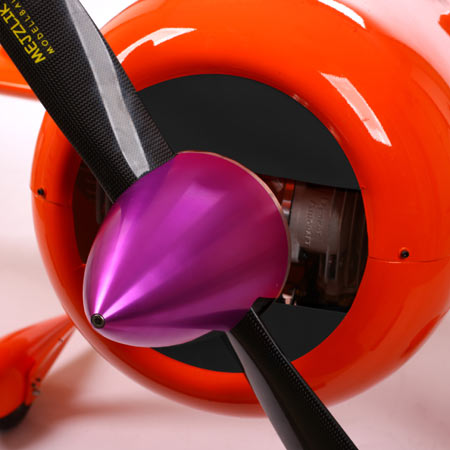 The spinner you see here is 5"diameter, so you can estimate just how huge the radial cowl is! The cowl is split along the horizontal centerline and retained by screws into pre-installed captive nuts. 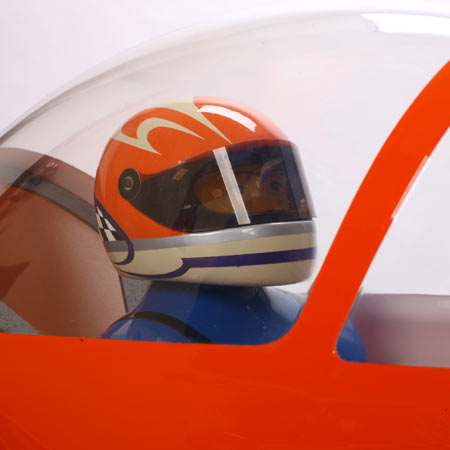 The one piece hatch/canopy is a fiberglass molding and is light but strong and unlike  a lot of ARF planes, a pilot figure is included!

From a flying standpoint, the Sukhoi delivers everything that is promised.

With the DA 175, unlimited vertical performance is possible and with the double tuned pipes, the motor is surprisingly quiet.

Any 3D maneuver is possible and only limited by the expertise of the pilot.

After reading a lot of reviews, it was obvious that the flying ability of the Hangar 9 Sukhoi is first class! Very little roll coupling and equal speeds in vertical up and down lines were evident.

In a model of this type and size, the DA 170, with tuned pipes or canisters, was the power plant of choice.

No building problems were evident and the finished model appears to be durable, with nothing falling off! It is still a new model and time will tell if there are any problems.

The Hangar 9 Sukhoi 3.1M ARF is in Stock