The photo shows the Century Radikal G30, a prime example of a gas RC heli. This type of power plant uses a gasoline/oil mix for fuel and are different to the more common nitro RC helicopter. To further confuse the issue, the term "nitro" is not really accurate. The more correct term would be 2-stroke glow RC model airplane engines.. The gas engine is usually a 2-stroke, much like the engines used in leaf blowers and edge trimmers. In fact some of the early examples were converted from just such engines.

The big advantage of  gas RC helicopters ( as well as gas powered RC planes ) is the relative simplicity of operation and reliability. Once an RC gas engine is run-in and set-up correctly, it is very easy to start and runs very smoothly and rarely quits running in the air.

The fuel used is cheap (gasoline from a gas station, mixed with 2-stroke oil) and readily available.

Some modelers believe that the future for all model aircraft engines is the RC gas engine. The modern solid state ignition system and developments in manufacturing and materials are the main reason for this.

Example of the RC Gas Engine 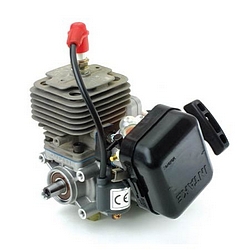 This model is specifically intended for gas RC helicopters. With a capacity of 23cc, it is claimed to have 20% more power than it's predecessor.

Power output is said to be 2.12 HP. and total weight is 3.97lbs and comes complete with a recoil starter.

Another big advantage of this type of RC helicopter is the overall cleanliness of operation. Compared to the nitro RC helicopter the gas powered version is FAR cleaner. No oily residue all over the internal components and the clean-up procedure, after a flying session, is far quicker-giving you more time for flying fun!

If you have any doubts regarding the performance of a gas powered RC helicopter then you should take a look at this video. Is that 3D or not?

The video shows the ease of starting a gas RC Helicopter and the 3D performance should show you that gas helis can really put on a show! (As long as you have the ability to fly like that!)

One application for the RC gas engine is that of scale RC helicopters. Gas powered RC helicopters are generally on the large side of the spectrum and the gas engine gives that reliable and dependable performance we have been talking about. Scale helicopters should be flown in a scale manner ( No 3D here-the passengers would be really sick!)

To sum up -more attention should be paid to gas powered helicopters! Especially in the larger sizes,  gas power has a lot to offer!